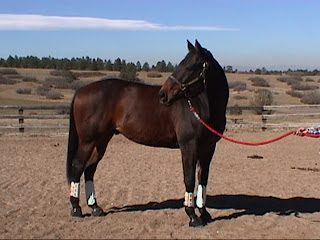 I've decided to post this in full as Kelley (KelleyANichols@cs.com) was so thorough, as usual -- I highly recommend her!

Note: For some reason the picture of him makes him look like he has short legs -- something about how it imported...imagine longer legs!

Hi Alice~ You are such a good horse mom to check in with Justin and see how he's doing. Justin wants to say first of all the he is very lucky to have you as his human. So many that he knows of do not have that relationship and he knows yours is different, special. He's very proud of his human and wants you to know that he could not have picked a better life for himself than the one with you. Sometimes you wonder what would make him happy, what would make his life easier, what he would enjoy that he doesn't have. He says that the fact that you worry about such things is the very thing that makes him complete in his needs. He knows no lack in his life. He's ready to move on to questions now that he's delivered his message to you. :

**Reminder here: I'm not a vet so I can't diagnose or prescribe medications, but I will tell you exactly what I am hearing.

Check his mouth for a sore from perhaps a sharp tooth …it would look/feel like a canker sore. Something is off slightly in the mouth so check it and see what you find.

The ribcage issue he describes as a bruise…needs time to heal, trotting is most aggravating as it is not as smooth in movement and the bounce is what is annoying with this bruise location. When he shows it to me, he shows an area of heat (the image he sends is like looking at an infrared camera picture)…perhaps try a bag of frozen peas used like an ice pack on that spot to see if it helps matters since the heat image is being sent by Justin. The timing on this, has it been about two weeks that you've noticed a behavior shift? Justin is putting this in a very recent time frame on the bruising sensation. There is no recollection/mention of a specific incident when I ask yet he insists it feels like a bruise to him. Other than the bruise, there is nothing coming up with him that would contribute to a fussiness when he's asked to trot. * Bruising is also helped by arnica Montana (herb) and I don't know the specifics on this as to what circumstances, dosing, etc but it could be something to check into if you have a holistic vet or therapist as with all herbs, there are toxic levels to this and guidance is definitely needed...

The diet is good, altering a bit when flare ups occur in the stomach. He tends to be more acidic is the sensation he's sending right now. Meds are in balance with his body, but his body can be off just a tiny bit and he will be more sensitive to the imbalance than others would. That's just Justin. There's no magic formula with him on this, but tweak things ever so slightly to balance the system when you intuitively sense it is "off"- never big adjustments, minor tweaks. How much grazing time does he get per day? You may want to bump it up a bit if that works with your barn manager. He tells me on the side here that you always worry about what he eats.

The digestive system can fluctuate with him, but currently he does not feel stressed in that area. He's more focused on the outer irritation of the ribcage area right now.

Time with you is so important to him and he states you are generous with your time where he is concerned. He says that you benefit from quality time with him as much as he does. Quality time meaning the time not spent in a lesson or training situation, but one spent in the moment of joy just being with each other. This is the good stuff to him. If he can get 15 min of the quality stuff at each visit, no matter how you spend it, it will be like a cherry on top of the ice cream so to speak for both of you.

He would like to be able to be the horse that can take you to whatever level of riding you want to be at. This is an aspiration of his. He is athletic and in good form he states plus he is quick of mind. He may need to be reminded on occasion that he isn't a youngster, but a wise mature fellow that commands attention with his presence alone. :) He desires to always bring you joy, never pain. Unconditional love. He would give his life for you as he loves you that much and he states you would do the same for him. You two have what many only dream of in a relationship.

Alice, when I ask about the cross ties, it is as if he is embarrassed at his behavior, and shrugs it off as if it were nothing and wouldn't be repeated.

Let me know if you have any confirmations for me or need clarification on anything~ hugs to you both!! Kelley
Posted by Alice at 2:26 PM 1 comment:

can have the trees in our saddles adjusted by putting them in a vice-like device, however, we strongly recommend against it. The concerns raised by consumers about how to maintain fit when horses change is largely addressed by the fact that County designs allow for substantial adjustment within the panels themselves. They are further addressed by our tree change policy, whereby County will replace the tree within twelve months of purchase if the horse changes enough to warrant a different size tree. The cost is a pittance compared to the performance, soundness and value of the horse.

So what happens when a tree is “adjusted” from the original design?

It is difficult if not impossible to simply squeeze or open tree points EVENLY using the devices typically used. It is no wonder, therefore, that trees that have been so altered rock on the horse’s back and create uneven pressure at the points.

Different tree sizes have different shapes. So it is impossible to make a pommel designed for a narrow horse spread to the shape of a wide horse by simply pressing it open or closing it .

What happens to the REST OF THE SADDLE when you stretch or close the front of a tree?

Consider how the saddle is constructed:

...The tree is made to very precise specifications in terms of shape and balance and calibration.

...It is reinforced with steel over the top and underside of the pommel as well as down its length to a precise tension.

...The tree is then strained up with nylon webbing from front to back and side to side to a precise tension and shape.

...The seating material is then placed on the webbing.

It all begins with a tree and any alteration or adjustment to the tree after the saddle is initially made affects every other aspect of the design:

...The tree shape is altered and no longer calibrated ...The tension in the steel reinforcement is altered ...The strain on the webbing becomes looser or tighter ...The seat itself is now sitting on a platform compromised by all of the above. 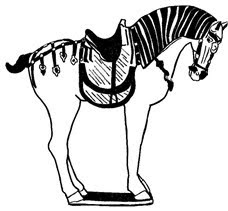